Finding Acceptance and Inspiration with Pornography 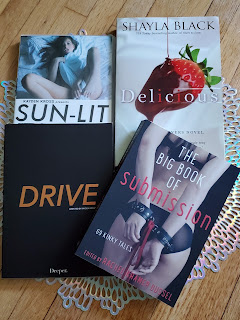 If you had told me 10 years ago that some women liked porn...I don't think I would have believed it. It seemed like such a "man" thing.

In my younger years, after we had a satellite dish installed, I discovered the Playboy channel. I watched shows on it a few times, one being Sex Court, which I found entertaining and the other was a talk show (can't recall the name.) I remember feeling curious yet totally worried about being "caught"...there was shame associated. Even though, it was the most actual sex education I ever had.

I was too naive at the time to understand that.

I was encouraged to explore and find what I would enjoy- I was also lucky that my husband helped me out by finding a few things for me to view based off of what he knew I liked (in general.)
I started off what I deemed very safe and went the route of plot-based (heavily) and opted for the two Pirates movies that were out at the time. I love Pirates of the Caribbean, so I figured that those would be extremely safe for me. They were. Cheesy? Absolutely at times. However, the curious predicament of "What does a couple DO during a plot-based porn film?"

If you explore Bellesa Co. and what Erika Lust offers, you'll definitely find films to view that are what I would consider catered to women. A lot of focus on their orgasms and pleasure- truly, there is something for everyone. A wide array of what a person might like to explore sexually and multiple body types. I remember from what I saw in my ex-husband's collection...body types that I absolutely could not compete with and/or work myself towards. It made me feel extremely inadequate and uncomfortable. Now you can find women in all shapes and sizes. Natural/small breasts, more athletic builds, etc. There are multiple body types for men, too. Maybe it doesn't seem as varied, but I appreciate seeing some who are more on the svelte side rather than big and buff "macho men."

Do keep in mind, if you're similar to myself with working on ones self acceptance of their own body, sensuality, and love of sex...you may find yourself overwhelmed at times. I've definitaly gone one step forward and two steps back...my confidence will wane and I'll feel inadequate and uncomfortable. I take a break from visuals and go to strict imagination and/or reading a book. The whole process of learning to accept my body and my love of sex is something that will take years- it's good to remember to be gentle with yourself. Don't force yourself down a path you aren't open to taking- take small steps and explore with an open mind and heart. Take time away if it feels overwhelming- that's totally okay.

Truthfully, there are so many more, but this is absolutely a wonderful mix of folks who are on the sex-positive spectrum from educators to performers.

I've learned in with all of this, pornography in general can be in several forms and I've found that I can appreciate and find appreciation with visual and audio forms. If I can, I imagine many others have already discovered this and/or will in the future.

According to the Erotic Blueprint quiz from Jaiya, I'm mostly kinky with a good blend of about everything else. I definitely find myself more intrigued with what could be considered "taboo" to some. Everyone is going to have different meanings for their personal term of "taboo" and some may be more intense than others. Really, you simply have to explore to see what jives with you. I'm someone who considers themselves submissive and/or submissive brat. I like being blindfolded. I like sensory play in terms of strong grip, light touch, pulling, pinching, and spanking. I like dressing up but not necessarily role playing.

Curious?-
Trenchcoat X- it will be a studio that doesn't have a lot of films, but there are options for anyone who want to explore say the kinkier side of things, but also beautiful options like the Sun-Lit series. The Sun-Lit videos are spot on if you're wanting bright, sensual sex.

Other things to note-
Adult Empire is a gigantic library in which to puruse and it's a great place to start if you're looking to purchase DVDS, etc. It is absolutely overwhelming, especially for someone like myself. In all honesty, listining to HRU helped me navigate some of that as I was able to find folks who sound like absolutely wonderful people who enjoy what they do for a living. I would start fielding searches based on a few things: women directed, popular for women, and actors that I felt comfortable with. Keep in mind, you'll still be down what feels like a neverending wormhole of options, and you may come away with what feels like a dud purchase sometimes.

If one isn't wanting to purchase DVDs- get an annual plan with AE or Erika Lust or Bellesa Co. and you can navigate through different options to stream. Personally, I like having DVDs because sometimes I get so overwhelmed with options that I'm better off saying "Okay, this is THE option for today!"

If you have Roku, you can download AE to your channels, which makes it SUPER convenient. Do note, that you can only have the account streaming from one device at a time, so if you are wanting to play around with different locations in your home (and have multiple tvs, it won't work unless you have multiple accounts.)