My Body Mythology- The Second Offense 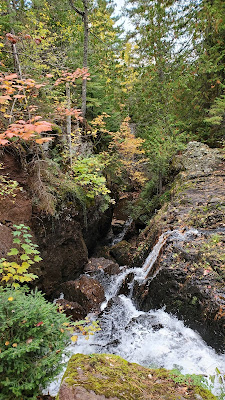 I remember one evening at 10 years old, I went to the bathroom and noticed something on my underwear. A mysterious dark spot.

I freaked out.
I thought something was wrong with me.
I told my mom.
She said that I might be starting my period and to put a pad on.

If I woke up with something on it, I was having my first period. GREAT. Womanhood starting at 10.

It's not like I wasn't already embarrassed that by the time I was in 4th grade my breasts were developing. I was already seen as weird. Now I had my period at 10, right before starting 5th grade.

I woke up the next morning with blood on the pad. I was so very, very sad.

My mom printed out information for me so I could learn about my period and what it meant. It was very straightforward. There wasn't specialness to it or any sort of celebration- it was all matter of fact, and thanks to the internet, the conversation was very simple.

I remember giving a note to the teacher, letting her know that I might have to go to the nurse's office to get ibuprofen or something as I started my period over the summer. I love how schools want to regulate your medication (as in, kids weren't supposed to bring stuff to school, it all had to be approved by an adult.)

For some reason, I decided to tell someone I considered a friend, about my starting my period over summer vacation. That was a stupid idea, because she was never truly a friend, and showed that by telling all of the other girls in our class. Why this was hurtful was because all of the other girls (especially the popular ones) started looking at me in disgust. They would ask in a malicious, pointed tone "So I heard you got your PERIOD..."

Like having a period meant you were gross. That you shouldn't be touched with a 10-foot pole. That you were "less than."

Periods meant you were disgusting.

What the hell? At the time, my only argument was "You'll get yours someday!" and I feel I was met with "No I won't!"

Completely laughable. Yet traumatizing to someone who had their body change before they were ready. I was one of the first girls in my class/grade to go through puberty, and going through all of those changes at a young age...being the first...also being one of the "unpopular" girls... all of that made school life more challenging for me. It made me weirder than I was. It did make me strong, but strength came with a price.

Puberty happening so young made me look older than I was. My grandma would tell me that I needed to act more mature and grown-up because it would be expected of me because I looked older. She signed me up for a magazine subscription to Teen magazine and I think Seventeen magazine. Ultimately, magazines that I was technically too young for at the age of 10/11, but she thought it would help me "grow up."

Instead, I was fed images of girls/teenagers that I looked nothing like. I felt fat and ugly while learning about how to lose weight and how I should attract boys. I had images of what I was supposed to look like and be like burning into my brain while feeling completely lost and unable to do so. I spent a lot of my childhood and teen years feeling inadequate.

March 01, 2021
It's been a while since I've written a sex toy review, and I'm here today to write a review on a vibe that absolutely...completely...sucked. In a bad way. I'd prefer to simply not write a negative review, but after looking online I felt I had to so. more folks could read that this toy may not be all that it's cracked up to be. I found a Reddit thread that said BB Boutique aka Bellesa possibly only published and/or made glowing product reviews viewable and did not publish any review that was negative. To be honest, I was excited and purchased the Bellesa x Buzzfeed Air Vibe BECAUSE it sounded flipping amazing. Boy...was I going to be proven wrong. The Air Vibe is a combination clitoral sucking/g-spot vibrator that is bendable to fit a wider variety of bodies. Unfortunately, I'm built in such a way that I absolutely could not get it to cooperate with me. With the g-spot portion inserted, I was hard-pressed to get the clitoral sucking part to line up with me in a
Post a Comment
Read more