My Body Mythology- The First Offense 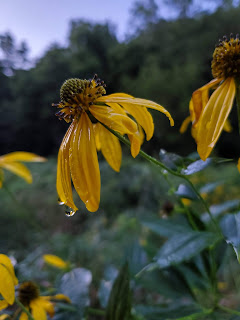 I was sexually abused by my oldest step-brother when I was 4 and he was 16.

(I'll call him OSB, as in future writings my other step-brother may be mentioned, and I want to differentiate between the two.)

It was my first experience dealing with not being respected as a human being that I can recall from memory. My lack of consent was ignored, and fear was planted in my young mind.

The abuse happened on two separate occasions, and I remember it one way, but my mom says it had to have happened the opposite way. To this day I'm not sure of which order anymore, but I will tell it how I recall it.

In my mind, the first time happened outside in the storm cellar out at the homestead. I used to enjoy going into the storm cellar as it was so neat to my young self. After the incident, I never wanted to set foot in there again.

I believe the three of us (OSB, SB, and I were playing outside.) OSB told me to follow him into the storm cellar, I don't recall if he said something like "I want to show you something." All I know is that at the age of 4, I wanted my step-brothers to like me, but all I was to them was an annoying little girl who shouldn't be around. So I can recall having an uncomfortable and nervous feeling in my gut, as I have had that feeling surrounding both of them pretty much ever since I've known them.

In the storm cellar, he pulled his pants down and requested that I lick his dick. I had never seen a dick before, so this was a shock to my 4-year-old self in that regard, plus being told to lick it...it seemed so very wrong. I did NOT want to lick his dick and told him so.

Then came the threats of "I won't let you out of here until you do."
The storm cellar was a dark, cement structure built into the side of a dirt mound, its intention is to be a place to go if a tornado were to come and you didn't have a basement to shelter in. There is no light, except for what is peeking through the boards that make up the door. It's scary to me now, and I wanted to get out.

Even tho I didn't want to, I licked his dick. It was quick. I felt uncomfortable. I felt like I had done something wrong. I wanted to get out. I wanted to get away from this person that made me do what I had just done.

How dare he say my mom would be mad at me! Yet at 4, I seriously thought he was right. It didn't matter that I had said no and was basically forced to do something because how could a 4-year-old overpower a 16-year-old young man? As I write this, I feel anger and sadness.

I went inside the house via the basement door. Which indicated to my mom that something was wrong because I was afraid of the basement. She recalls that I walked up the basement steps and into the kitchen with little to no emotion.

The second time my "No" was stolen from me and ignored was when I was down in the family room watching t.v.
I believe my mom was upstairs in the den, which would be angled as such if you moved a chair far enough back you could see me watching t.v.

OSB was either downstairs already or had come downstairs.
He had me go into the downstairs bathroom with him. I can't recall if it was under the guise of "I want to show you something" or if he simply said "Come with me" or whatever.

He instructed me to pull my pants/shorts and underwear down, and to lie down on the floor.
I did not want to, but again, I was told that I wouldn't be let out if I didn't comply.
I'm not sure if he said something like "It will feel good."

He licked my pussy.
I was lying on the floor, cement covered with a paper-thin carpet. Listening to the overhead fan. Uncomfortable. I think I shut part of my brain off...the only way I could activate my "flight" response was to turn part of my brain off. He didn't do it very long, and after he was done, he reminded me not to tell because I'd get into big trouble.

See, both situations were brought on by his being hurt that his and SB's mom left them to live with their dad. She literally up and left one day, to barely be heard from again except occasional phone calls on their birthdays or whatever. My mom and I had moved in probably not too long after she left, or it was soon enough that they were offended and hurt. They didn't like my mom. She wanted to change things, like hold them accountable for their actions aka if you do something wrong, you get in trouble. She wanted a clean house instead of letting things pile up. She was the embodiment of change and moving on, and the boys didn't like that. So I was the literal scapegoat. OSB thought if he did something so horrible, that my mom would take me and run.

It didn't happen. We stayed. My mom felt like she was the only one to take the whole thing seriously. It felt like everyone else played it off like he was young/dumb and a hurt teenage boy who wasn't in his right mind. I'm not sure if folks thought I was young enough that I'd simply grow out of my memories and forget. I didn't. Hell no. OSB's actions toward me changed my way of thinking for as long as I could remember.

I have since accepted what happened and have given myself love and care. I've gone back and forth between being told I should forgive him for his actions because that's what you're supposed to do. I've come to the conclusion now that I do not feel forgiveness is the appropriate method for my healing. I feel if I forgive, I'm not holding him accountable for his actions. It's more important that I forgive the 4-year-old girl who had innocence stripped from her. To forgive her for being afraid and believing someone she thought she could trust.  That child needs a lot of love because those two situations took so much from her, and I believe made her feel like she has had to hide part of herself for so long.