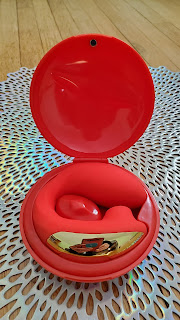 It's been a while since I've written a sex toy review, and I'm here today to write a review on a vibe that absolutely...completely...sucked. In a bad way.

I'd prefer to simply not write a negative review, but after looking online I felt I had to.

I found a Reddit thread that said BBoutique aka Bellesa possibly only published and/or made glowing product reviews viewable and did not publish any review that was negative. To be honest, I was excited and purchased the Bellesa x Buzzfeed Air Vibe BECAUSE it sounded flipping amazing. Boy...was I going to be proven wrong.

Sadly, this adorable toy is a complete bust for me. Beyond not being able to get the clitoral portion to cooperate while using the g-spot stimulator, the first level of clitoral suction is (for me) way too intense.
When it comes to toys to stimulate the external portion of my clitoris, it's best if I can start lower and choose to go high rather than "BAM!" HAI!!! Woah. I like a build-up and this was far beyond that for my sensation desires.

The buttons are also frustrating. When it's inserted unless you decide to use a mirror, you can't see the buttons and I found myself accidentally turning it off, increasing the level of intensity for the wrong area (clitoral vs. g-spot) and I literally wanted to throw it across the room.

Overall, the concept of this toy is good. It can definitely work for some, but I feel as tho it's made to sound like it will work for everyone when it works for most everyone. I think it works better for someone who perhaps has a higher external clitoris. I kept trying to find a way to push down the sucker to try and get it to line up. I kept trying to pull out some of the g-spot vibrator to try and be able to bend the top portion to match up, and I still couldn't get it quite right.

It does have a shape I wish worked.
I like the storage case/charging case, but until you use it a few times, you have to remember to line it up just right or it won't shut.
The buttons are a pain in the ass.
It may be too powerful for some.
It works for many, but not for ALL in terms of flexibility/shape.

If you want to try it, I'd recommend getting it when there is a sale so you aren't paying full price for something that may or may not work for you. Keep in mind, due to popularity it's oftentimes on "pre-order" status, so you'll be waiting weeks before it arrives. 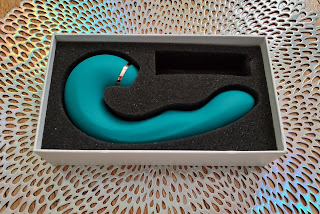 It's on Amazon (yes, I know...) It's from a brand called Sohimi, and it's actually pretty damn amazing if one is wanting something fun for solo play. I can't say that the g-spot stimulator hits my g-spot, I do feel I have to have it inserted further in so it's beyond it, but it still feels fan-fucking-tastic. 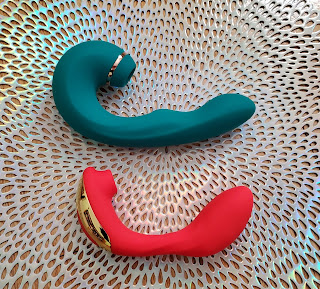 The button setup is similar to the Buzzfeed Air Vibe, but I think because it's on a bit larger surface it's easier to deal with. I can also feel the buttons better, so it's more intuitive. Plus, the power starts off low and you can work it up rather than being hit with a brick of stimulation to knock your socks off right from the start.

Price-wise, it's not heartbreaking if it doesn't work, which is a bonus. Sohimi does have an actual website and they have been making toys for over 10 years. I am rather cautious over purchasing sex toys on Amazon, so I make sure that 1. They actually sell elsewhere, 2. Body-safe silicone is a must 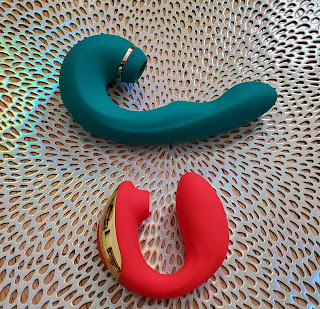 Overall, my preference is to purchase from small businesses/small independent companies- so just about all of my purchases have been directly from the business itself or from smaller online shops- Amazon can be convenient, but it can also be a wormhole. However, some brands are on Amazon like Tantus, etc.

Anyway! There you have it. If you want a short, totally opinionated review on the Buzzfeed Air Vibe that seemed perfect but turned out to be a dud for my body.