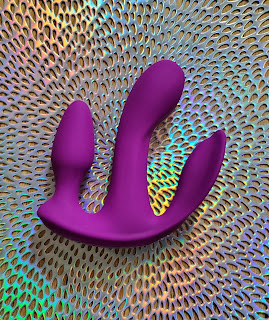 My hope was that this could be something that I could utilize when pleasuring the Hubby, because why not? I struggled with hands-free toys not being strong enough and/or having sensations that I would really enjoy.

Upon receiving the toy, I had to say that I enjoyed the packaging and it made me feel as tho I was opening up a truly special gift. You could open up the outer flap to reveal the toy inside the box and read a little about it. On the back of the box is additional information. Inside the box is the toy, a remote (with battery included), and a charging cable. There is not a storage back for the toy itself (currently I use the box.) 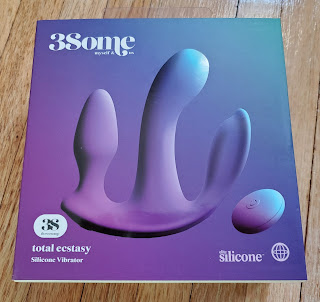 There are 3 speeds and 7 vibration patterns which gives you a variety of flavor when it comes to what sensations you would like to experience.

This particular toy in the 3Some lineup does not have a handle, but you can "ride" it. What I found that worked best for me was using it in conjunction with my Liberator Wing pillow. I inserted the toy, turned it on, and then cycled through the pattern options until I found something I liked. The times that I've tried to use it without riding it on my pillow, I found that I wasn't getting enough pressure on my g-spot. 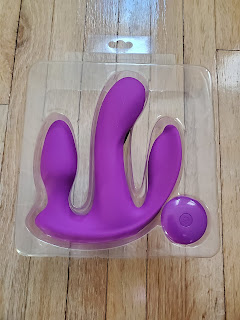 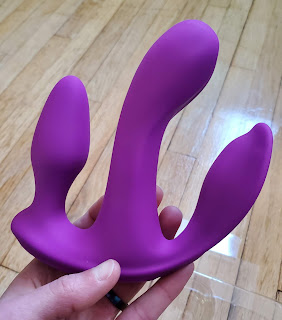 I feel like depending on how you are built this may or may not be an issue to deal with. At this time, having used this toy for just solo, it does require a little bit of work on my end to get myself off with it. This means (imo) that I wouldn't be able to just stick it in, turn it on, and orgasm. I can get pleasurable sensations from it being hands-free, but it has worked the best for me if I manipulate it.

It's handy to have the wireless remote so I'm not having to stop grinding to flip through settings. There are times when I do not feel that the remote works flawlessly, but most times it's fine for the application. I'm pretty darn patient.

Overall when it comes to the different patterns, I found that I have really enjoyed the 5th one the best. I'm not going to try and describe it with descriptive words, because I think that would be hilarious, but it feels really damn good. 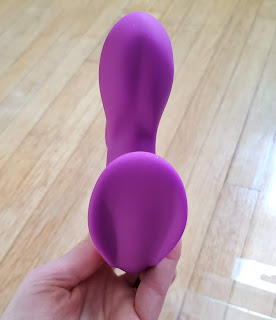 The butt plug is a nice size and I have had no issues with inserting it. I'd say it's a great practice size for me. The g-spot portion of the toy feels really nice and has a great sensation when it's rubbing against it. My only issue is with the clitoral stimulator being so long so it's focusing more on my pubic bone vs. my clit. At least it is flexible and overall, a nice size for stimulating a wide area so you can easily find a sweet spot. Overall, I can work through it with positioning it manually and let me tell you, the orgasms that I've had with this toy are flippn' fantastic. I mean fantastic with a capitol FAN to the Tastic. Your lower half is being taken to Flavortown in the most amazing way, and once I feel a climax coming, I ride that wave like no tomorrow.

I really like the sensations that I have with DP, so having a toy that allows me to have that as often as I want, whenever I want, is really fun. I am looking forward to using this toy in conjunction with partnered sex at some point, and I think it'll be really fun.