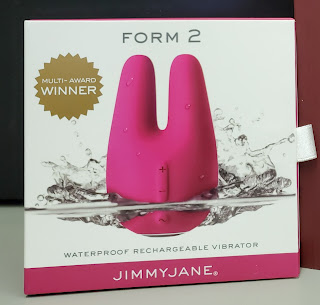 Being that I enjoy bright, fun colors, I chose the hot pink option. I guess there are times when I could be classified as a "girly girl" and when there is a vibrant shade of fuchsia to be had, I have to have it. Not to mention it is considered a body-safe and Phthalate-free toy!

Another thing I looked at was the run time, which JimmyJane says is over 4 hours on a single charge! That's flippn' amazing.

I also wanted to make sure I found a vibe that would have power levels, and this one comes with 5 power levels and 4 vibration modes. Perhaps not as many options as some, but the power levels are what I care most about. Typically, I like a steady vibration or at least a vibration pattern that stays pretty level with a little variance. I dislike anything that's too soft or too drawn out as I find that it doesn't stimulate me enough or my excitement wanes as the pattern dissipates.

I don't want to say my feelings on this cute little vibe are mixed, but at this point they are. I assume that the more I use the Form 2, the more I'll like it, but it wasn't quite what I was expecting after reading so many positive reviews. Now, I won't say that this vibe doesn't make me orgasm, because it absolutely does. It seems for my body (at this time) it builds me up slowly. I have not had an instantaneous "blammo" experience from this cute little contraption...yet.

The first time I used the Form 2 was when my husband and I were having a sexual romp. I would say that it was an awkward instance of me getting used to a new toy and struggling with figuring out the best vibration mode and pattern to use for the position we were in. I had one of those baffling "I think I just had an orgasm, but I don't know for sure if I did?" As in, I was built up enough, but the angle and everything else going on made it hard for me to feel myself contract. I learned a valuable lesson: Make sure you play with a new toy solo before introducing it into a sexual escapade. 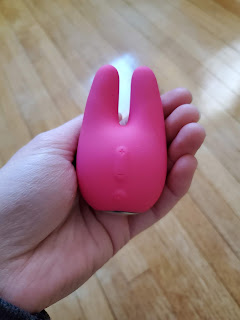 The second time I used the Form 2 was the next day, after settling on a pattern and vibration speed, I came a lot easier and knew for sure what had happened. It wasn't a quick one, instead, I could feel the pressure building inside. Ultimately, that slow burn of rumbling vibrations left me with a very satisfying orgasm, tho it left me wanting another one (I did have to swap toys for that) but what I liked was even tho I orgasmed, I was still able to leave the vibe where it was on my body to continually enjoy the pleasurable sensations without feeling overstimulated. That was awesome.

The third time I used the Form 2 was for a solo session so I could really take the time to explore the different vibrations and modes. From the modes available I seem to gravitate towards the full steady or the last mode which is consistent with the up/down pattern but in a strong and close together not with a longer gap between. It's not to say the 2nd and 3rd patterns aren't nice, but I must have an impatient clit that really likes it steady and focused!

In terms of the vibration speed, I typically warm up for a few seconds with the lower speed and go up in 1 step increments. At this time, I would say that I seem to float between speeds 3 and 4 for a finisher as 5 seems to be a little too intense for prolonged pressure on my clit. 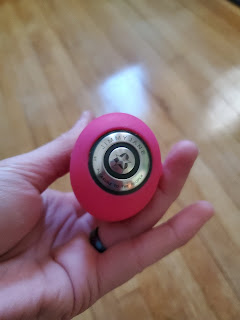 So, with that being said, I like how this vibrator isn't one that I can use to get off super quickly. It's nice to have something that builds me up to an intense climax rather than just jolting one out of me. However, if I had a limited block of time to have a quick session, I would not grab the Form 2 first. This is something that I would utilize if I had enough time so I could really treat myself to a self-pleasuring session that feels more like I'm worshipping my clit instead of trying to force out an orgasm.

In terms of the vibration, I would say that I feel like it's more rumbly vs. buzzy, and that's another thing- I think buzzier vibrators have worked better for me to get an orgasm out hard and fast, but rumbly vibrations seem to make me work up towards a climax. Rumbly vibrations also mean that in the end, it's easier for me to have multiple orgasms because I'm not super numb/tingly. (Yay!)

Learn more about the JimmyJane Form 2