Zumio X Review: Did I Join The Pleasure Revolution? 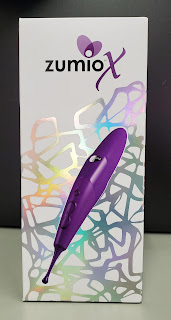 Not too long after creating my Instagram page, I found myself scouring through new pages to follow, one of which was for Zumio.

Zumio is a company that has created an extremely intriguing toy that claims that it can help you find new pleasure centers with pinpoint stimulation.

This sounded extremely interesting and worthwhile to try, however, to make things complicated they offer a Zumio X and a Zumio S (Sensitive). I went back and forth over which one to try. Both do the exact same thing, but the Zumio S is designed to be less intense due to the silicone covering on the tip. I read several reviews comparing the two, but ultimately what had me choose the Zumio X was the longer tip. I figured that if it was longer it would be easier for me to utilize when having sex with Hubby rather than a shorter tip that might not reach as easily to hit where I need some extra stimulation depending on the position. I also figured that I'd be better off having too much intensity than too little because at this point I've been disappointed with a lack of vs. too much when it comes to toys.

It was an exciting day when the Zumio X arrived, and I must say, the packaging makes it very appealing! It's not a large toy by any means, and the slim profile makes it easy to hold onto and point the tip where you want it to go.

It has wireless charging, which is nice. It comes with a base charger and a cable that you can plug into a computer to or USB adaptor to charge it. I did end up asking Zumio about the change time, because it seemed like it took a very long time for it to fully charge up. This is what Zumio said: "We use what is called “induction charging” so that there is no opening in the exterior of the unit. This allows the Zumio to be waterproof so it can be used in the bath/shower. This type of charging does take longer than conventional charging but since it is not something that you use 24/7 like a cell phone, this usually is not an issue for people. It also does make the unit warm to the touch after it has been charging for a while, but it will never go past that.

The flashing light is simply just a timer. Once you put your Zumio is the charging cup, the timer starts for 16 hrs, then it will go solid. If you remove it from the cup at any time, the timer will restart." 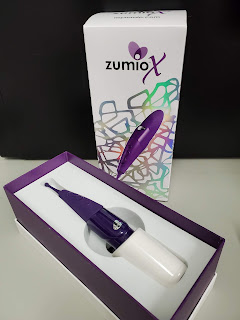 There are 8 levels of speed and within each level how light or firm you press will give you either light stimulation or deeper/slower stimulation. With the Zumio X, I do not find myself using the highest speed but am probably within the first 3-4 speeds most often, depending on if I've already had an orgasm or not.

It is a very interesting toy to play with and it truly lets you find and pinpoint different areas to stimulate. I mean, if you further your search on the clitoris it's far larger than one thinks, and I have definitely found stimulating different areas to be extremely pleasurable.

The orgasms that I have created from using the Zumio X are some damn fine ones. I'm talking about having an orgasm that makes you feel really satisfied. As in, rocks you to your core and makes you think that you could actually be fulfilled in that very moment. I've found it to be the go-to tool when I'm wanting to climax multiple times. The other night when I played around with the Zumio X after I had already had an orgasm, my second orgasm blew my mind! I felt myself contracting for several moments after, it felt like it was going forever!

For myself, I'm not giving myself 60-second orgasms or anything as I find that it does take some time for me to build up. I think it's also because I went with a stronger option, so there is a higher possibility of too much sensation. I would say that you definitely feel like an artist working the Zumio as you are creating a work of art that is your climax.

Being that I'm basing my review on less than 10 uses, I would say that I would highly recommend the Zumio X to anyone who is wanting to really investigate clitoral pleasure points. I find that when I'm using it I tend to gravitate towards my left side more than my right because it feels a touch more sensitive on that side. It doesn't stimulate by vibrations, so that is a bonus for me (one who is always a touch worried that she'll become too dependent on vibrations.)

So far I've had limited use with the Zumio X during sex, but I will say that it does indeed coax an orgasm. My issue is depending on the position, it's not as easy to hold as I would like at times. Also, it feels like what feels good one-second shifts and then I'm finding another small pleasure spot again. I guess I should say, for vigorous sex it can be challenging to keep yourself holding it down where you want it. I would assume that some of that will change with practice. 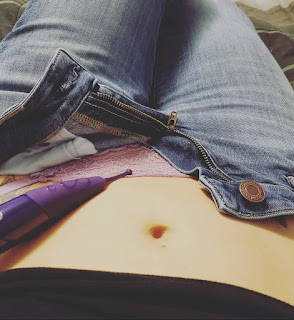 The Zumio X is a fabulous option for "Power Queens" who really want the maximum intensity possible when it comes to vibrators and the like. I've read several reviews, and many state that the Zumio S is a fantastic option and between the two has become their favorite due to the less intense nature of that device.


Will I find out if I like the Zumio X vs. the Zumio S? Only time will tell!


If you would like to learn more about the Zumio or purchase one for yourself, click here!