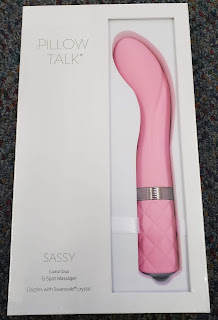 I had two toys that were supposed to help me work the spot, but they were entirely lacking in the department of being able to really stimulate the area. I need something that was girthy, that had a wide area that could be used to apply constant pressure and something that wasn't super flexible.


How can you go wrong with that statement?!

When the Pillow Talk Sassy arrived, I was super excited. The packaging was SO attractive! I mean, I felt like I did when I was opening up a new Barbie doll as a kid. It was presented in a clean and sleek manner. The box was sturdy, and the Pillow Talk Sassy was definitely the star of the show! When I opened the box, lifting the inside packaging revealed a satin bag and charging cable. You also get a wee little brush to use for cleaning! Once it was room temperature, I plugged it in to charge. 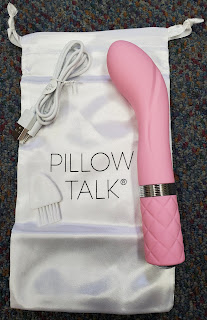 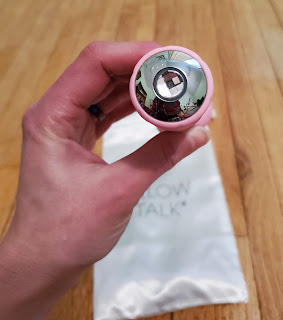 I really appreciate the fullness of the insertable end, it works far better for me than the Lelo GiGi 2 for really tackling surface area and making it a more pleasurable experience if I'm wanting to move the Pillow Talk Sassy back and forth vs. up against my G-Spot only. Plus, I like the feeling of being "full" and the Pillow Talk Sassy provides that feeling with flying colors.

I can't say that I've attained a true G-Spot orgasm at this point, but I have definitely awakened the spot! I know that applying pressure to that spot long enough made it incredibly easy for me to climax with using my fingers for clitoral stimulation and using the Pillow Talk Sassy internally. Powerful stuff right there. (I should also mention, during that session I had NO other clitoral stimulation. All of the arousal was solely built up internally prior to my finishing myself off.)

When it comes to using the Pillow Talk Sassy as a clitoral vibrator...all I can say is "Hell Yes!"

At a very affordable $54.00 this is easily a vibrator that I would say is worth every penny for being able to provide ample stimulation internally and externally.
It comes in a soft pink or teal color. I like both but went the pink route because it spoke to me.
It looks luxurious, has a great hand feel, and has a sparkly crystal to complete the package. It just looks pretty and makes me feel pretty when I use it. It's going to be a popular go-to for me when it comes to solo or partner play. Even if it's being used for a longer session, I appreciate that it doesn't deaden my hand with vibrations. Some wands and such are so buzzy that it travels up your fingers and makes your whole hand feel weird by the end. This does not do that. The handle is also comfortable and easy to hold, the button easy to access so you can focus on what's going on vs. having to double-check if you're pushing the right button. 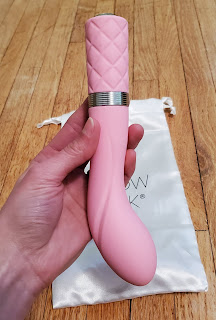