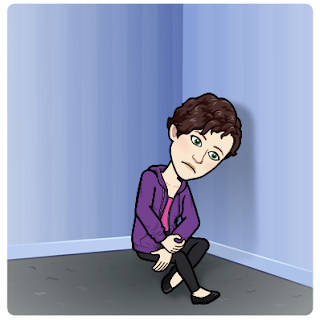 It does. You can't deny it.
I've experienced different levels of grief, but the most profound and life-altering was when my dad died. I wish that he had died in a more romantic way, but that's usually only in movies and books.

How he died was absolutely heartwrenching for me.

Not only do I feel that I have to defend his passing (because he had cut trees many times before, so it seems so stupid that he died from a tree cutting accident) but it altered his appearance.

When I saw my dad for the last time, I saw a human who had their chest crushed by a tree. What happens when you have something heavy on your chest for a period of time? You have fluid buildup. My dad's head was swollen and he didn't look like my dad. He looked like he had grown a puffball mushroom where his head should've been.

I had the option of having his face covered up, but I didn't. I didn't want to look, but I did at the same time. I would never see my dad again. It was an entirely confusing situation to be in. I opted to look maybe once or twice, very quickly and focused my attention on his hands. His strong, capable, gentle, rough, worn hands. The hands that could rub up and down my back and bring me instant comfort. The hands I would never get to touch again.

Death can be cruel. Death can be violent. It can drag on. Some individuals are able to pass in their sleep while others leave this world in ways they probably wish could be different. There are very few deaths that I would say are "good deaths." Instead, we're surrounded by many who are dying slowly and painfully due to disease. Some pass from accidents. I did sit and think about if I would've preferred my dad passing in some other way. The answer is no. I would not have wanted him to have a long-standing illness to take his life. I wouldn't have wanted him to die from a diabetic episode. In a way, this quick and untimely accident was probably one of the best ways to go. I will continue to believe he didn't experience any pain because it happened so fast.

I do suspect, tho, that this incident did create some PTSD.
I think it's part of why I'm having a hard time interacting with that side of my family.

After the initial shock wore off from the event, and I was thrown into executor duties, but I couldn't stop thinking about being told of the event.
My mind would go to this awful space where I would replay my aunts telling me he was gone.
I'd replay the sound of my cry. This awful noise that came from my gut and out my throat.
I'd be thinking about it during a massage.
I couldn't stop.

Then it slipped into a fear of death. A fear of dying.
Closing my eyes became scary. Would I be dead but still aware?
Was I happy with life?
Would anyone miss me?
Would I be literally gone, like, do spirits exist and would I go onto a different life?
Would I be in black silence forever?
I was scared.

My anxiety was awful, but I made myself work through it the best I could. I would get this awful feeling in my gut.
I hated when my phone rang. It would mean something.
I hated that I had to answer phone calls from spammers because I didn't know if the number was actually a real person about estate shit or if it was fake.
I hated being in a world of unknowns.
I hated to see first hand how my dad lived.
His environment did no favors for his health.

How he lived scared me into thinking I could be a legit hoarder if I wasn't careful.
I am careful. But it also means I'm afraid to buy things sometimes.
I hated the thought of "stuff."
I hated not feeling confident that I didn't throw anything super important in the dumpster.
I hated that I had so few things I wanted to keep in order to remember him by.
I hated how difficult getting stuff situated was.

He had let a lot go to the wayside in terms of property maintenance. My beloved, kind father just put shit off that he didn't really want to deal with, in order to do the stuff he wanted to do.
It meant the electrical was bad.
It meant the septic system needed to be replaced.
The wet year made the watershed high, so it had to be a fancy septic system= a lot more $$$ spent.
The well was bad.

Just one hit after another.
And folks wonder why I wanted to sell?
I wanted to run away from it.

I hated that something that I originally wanted to have so desperately as a child turned into a nightmare. I tried to look past the dilapidated mess and appreciate the nature surrounding it. No wonder my dad liked being in the woods or in his CRP grove of trees. His world was a mess to which he saw no end. He was beyond being able to help himself.

I was in such emotional pain, and I had to drown it out. I couldn't focus on grief let alone grieve my loss. I had to take care of shit. When everything is left to you and you're the executor, you're drowning in adulthood.

No one really tells you what is going on, how to do things, the order of the process. You start out hoping for the best and that you won't go to jail in the end.
The phone calls you have to make. How everyone apologizes for your loss. You want them to shut up. It hurts. You resent the fact that only YOU can do any of this. You can't have a break and have your mom or husband help you out- because it's the executor that needs to do the talking.

I tried to do this grief course thing, and I couldn't do it. I paid for it, I started some of it, but I had to take a break from it. At the time, I was still so immersed with other shit I couldn't focus. I also felt more depressed with reading the losses other folks had experienced. I couldn't handle it. I realized that I wasn't in a place to deal with more sadness. I needed to be strong.

It's been over a year and I'm still in this weird space of thought.
The estate isn't closed (yet) and I'm still not desiring to be around most of my dad's side of the family.
He was the core reason I went to holiday events. Without him there, I feel like I'm some random piece of driftwood floating in the river. I don't want to walk in and not see my dad sitting in his usual spot. That hurts me the most.

I'm still in a space of awkwardly accepting sympathy over my dad's passing. Part of me wants to brush it off like it isn't a big deal, but it is and has been a big deal.

I fell off my own emotional ledge.
I became depressed.
My anxiety overwhelmed me.
I lost my sex drive.
I had a hard time achieving orgasm.
I lost joy.
I couldn't laugh much.
I had severe physical pain issues, so much so, I would have awful nerve pain after a massage.

During 2019 I was able to reclaim my sense of self, went on medication to help the anxiety/depression, and went to physical therapy to aid in my pain.
I made 2019 the "Yes Year" and focused on bringing happyness back into my life.

Grief sucks. It can affect humans in many different ways. The traumatic event has affected me in many different ways. Grief is here to stay, but it comes and goes depending on the time of year. I'm able to cope and process- but a part of me has been altered. It's like when you drop a plate- it breaks into pieces that you can glue back together, but it's never quite the same. That's me. It's okay.